Why Wage Garnishment Is a Good Reason to File for Bankruptcy 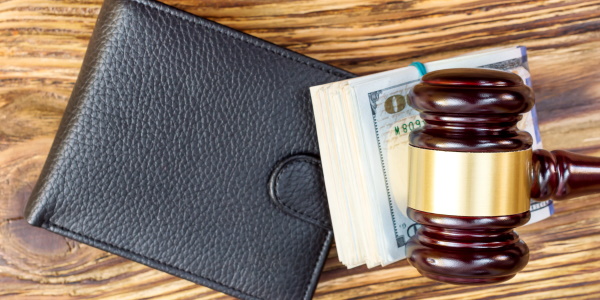 Obsessive calls and letters from creditors demanding payment. Pressure. Stress. The debt getting bigger and more out of control with each passing day…

If you’re struggling with debt, this may only be the beginning.

After a while, the creditor – the person or entity to whom you owe money – may then sue you for payment of the debt and garnish your wages. In many states, this means they can take 25% of your income, leaving you unable to pay for life’s basic necessities. Even people who are comfortable financially would likely feel a huge blow having 25% of their wages taken away. But if you’re struggling with debt already, this can be devastating.

That’s why it may make more sense to file for bankruptcy if you’re in financial trouble, as bankruptcy can help you avoid wage garnishment entirely.

If you’re burdened with crippling debt, it’s time to speak with a bankruptcy attorney, such as Colorado’s Wink & Wink. They can review your case and see if bankruptcy is the most sensible option to help you avoid wage garnishment and get you back on your feet financially.

What Is Wage Garnishment?

A wage garnishment, or wage assignment, is a court-ordered process through which your wages or earnings are withheld for payment of a debt to one of your creditors. Basically, it is a legal way for a creditor to take a significant portion of your wages directly from your employer.

How Does a Creditor Get a Wage Garnishment?

In order to get the right to garnish your wages, a creditor has to sue you and get a judgment against you. When you receive a summons notifying you that you’ve been sued, the creditor will probably be able to secure a judgment against you within 30 to 60 days if you do nothing. You may be able to extend this time by answering the complaint and requesting more time. It never hurts to make the creditor prove their case by asking for a copy of the note or a summary of payments and interest charges.

However, these tactics only buy some time (perhaps another 60 days or so). In general, most debtors – the person who owes money (in this case, you) – do not have a good defense to the lawsuit. If you owe the money and the creditor hasn’t waited too long (for many creditors, they can wait up to six years to sue you), then there’s not much you can do to stop a judgment against you for the amount of the debt plus interest plus their attorney’s fees in recovering the debt.

And it should also be said that simply ignoring the summons is never a good idea. Some judges will even issue warrants for your arrest if you do not show up in court to answer for your debt or fail to make a court-ordered payment. While these cases may seem extreme, you probably don’t want to risk the possibility that you may spend a night in jail over a debt.

Once a creditor gets a judgment against you, they can get a writ of garnishment from the court. While the judgment gives the creditor a right to seize certain non-exempt assets, such as cash in a bank account above $2,500, creditors pursue wage garnishment for many debtors. This is because many people have few, if any, non-exempt assets (which means they would keep all of their property in bankruptcy), and wages represent a stable source of income to draw upon.

Once a writ of wage garnishment is issued by the court, it is then served upon your employer, instructing them to withhold a portion of your paycheck and give it to your creditor. The employer is legally obligated to obey the garnishment order. Similar to how taxes and other deductions are automatically taken out of your paycheck before you get it, now the garnished wages would be too.

From the time of the judgment, creditors can often get the writ of garnishment issued and served to your employer within approximately 60 to 90 days. Therefore, from summons to garnishment generally takes three to four months if you do nothing (again, be wary of the risk of an arrest warrant mentioned above), and can be extended a couple of months if you make the creditor prove their case.

If you don’t take action, your financial situation may only get worse and worse. That’s why it’s crucial you speak with a bankruptcy attorney near you, such as Denver bankruptcy law firm Wink & Wink. Their lawyers handle not only personal bankruptcy but also small business bankruptcy as well.

How Much Can a Creditor Take Through Wage Garnishment?

The answer depends on the state you live in and the type of creditor suing you. In Colorado, most creditors can generally take 20% of your gross wages until your debt is paid, while the federal level is 25%. (It is possible for them to take even more if you make more than 30 times minimum wage.)

In Colorado, as in most states, only one creditor can garnish you at a time. If you are being sued by multiple creditors at the same time, they will have to essentially get in line to be able to garnish your wages. Still, they will get their turn at your wages if they have a judgment against you.

The IRS often takes more than the 25% wage garnishment limit because there are special federal laws which govern the amount of your wages the IRS can garnish. This amount is determined by a formula calculating the tax owed, the number of dependents you claim, and other issues. Generally, this formula lets the IRS take 30% to 70% of your income!

Filing for bankruptcy can help you avoid losing this huge level of income. Certain taxes can be discharged in bankruptcy, while other taxes can be paid over 60 months in a Chapter 13 bankruptcy. Learn your options by speaking to a Colorado bankruptcy lawyer, such as Wink & Wink of the Denver area.

While bankruptcy does not get rid of student loans for most people, it can help you wipe out other debts so that you can then afford to repay your student loans.

Simply put, if you’re behind on debt payments and you have a job, a lawsuit and wage garnishment are coming your way sooner or later. Your creditors have plenty of time to sue you. There’s an entire industry filled with lawyers who specialize in suing debtors and getting garnishments. They’re good at what they do, and won’t let you slip through the cracks.

Time is of the essence. Don’t let things spiral out of control. Meet with a bankruptcy attorney as soon as possible so you can get ahead of the case and avoid losing valuable wages to garnishment. Speak with a respected bankruptcy law firm near you, Denver bankruptcy attorneys Wink & Wink. Contact them online or by calling 303-410-1720.